Finally, here is a post on my experience participating in a three-minute thesis competition at the University level. I intentionally delayed the post because I waited for the formal publication from the University. It took around two months for the Research and Education Development (RED) Unit because they experienced technical issues. As I previously wrote (read my story on the Faculty level here), I should represent my faculty, Faculty of Education, in the University final level. There would be only five best representatives from five faculties in La Trobe University in this final. Oh my, I started to have butterflies in my stomach! 🙂

I got an email from the RED unit about the 3MT final. It’s been like a month after the previous Faculty event. Now, I have to prepare again. I might need to revise some key points as progressions have been made along the research. But then, it turned out that having new revisions, even very little ones, might mix your sentences! I smiled many times that I still used the previous ideas or even jumped the flow of ideas I have set up before practicing. Again, having practices was the key element here. Together with the research group, I practiced for several times This ‘Community of Practice (CoP)’ immensely improved the quality of the talk. Together with a Saudi female friend – another CoP member – who won the People’s Choice, we practiced, revised, and practiced again.

We also went to the venue to practice while trying to grasp the ‘real’ atmosphere there. It is a bigger venue and I could sense a more formal atmosphere in this place. I could imagine some more people from different disciplines coming with some big professional cameras at the back recording you. Too much? Yes, but good.

Indeed, a lot of efforts have been made for this event. More time and energy should be carefully allocated for this big event. What is good for this competition is that it enables you to distill your research which appears abundant in a more concise form – in 3 minutes. I should be grateful for this.

When the day came, I wore a similar suit, Batik, only this time, it’s blue. My supervisor is quite keen to fashion, I think. Since the venue is pretty dominant in red, I was suggested to avoid reddish colors (like the red Batik I wore earlier). Another good thing to learn I guess :). There were two sessions this time, one was for the People’s Choice Award and the other was for the Faculty winners.

I came around 11 a.m. to support my colleague who participated in the People’s Choice. There were five participants from each faculty. I also came because I needed to find out the way it was done so I could get a feeling of how it’s going to be when my turn came in the next couple of hours. In general, I found all performances were impressive! As you probably remember, they were voted previously as favorite presenters in their Faculty. Therefore, it is quite interesting to see how they attracted the audience during the event. The University, moreover, broadcasted this event via its official twitter. 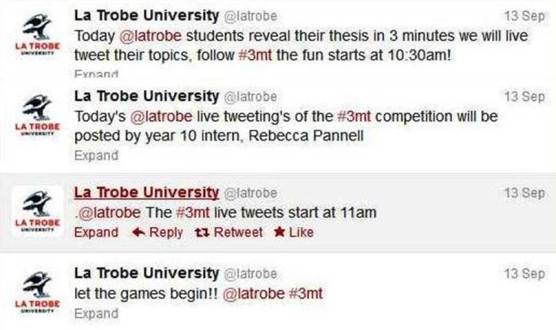 After these, one by one, the presenters talked about their researches in front of the audience who become their judges. Here I embedded the tweets from the University’s twitter for each of the People’s Choice presenters. 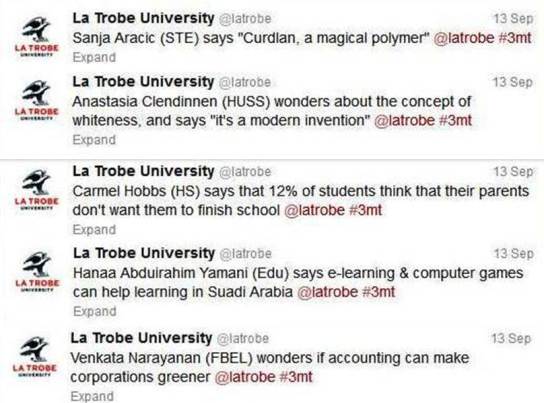 After the People’s Choice Award’s session ended, I met some of them and congratulated them for having great presentations. I know some of them since we met earlier in the Media Training conducted for us. This training was basically some tips and guides to face the media and press, if necessary. Assisted by the Director of Media and Communication Unit of the University, I found the session was very important. It helped us to be more aware of projecting a clearer and better picture of yourself in front of the media’s perspective. Apparently, we would be recorded and probably got interviewed. This is good, I think, because handling media might be challenging if you don’t know how.

My turn would come in two hours from the first session. I then went out to have my lunch and have a bit of practice. My supervisor, together with some friends of the Indonesian Association, faculty colleague, and research fellows came to support. I felt blessed and encouraged.

I went to the front to find out that my presentation time was the fourth from five presentations. I talked with other faculty representatives, David, Karina, Ross and Dinithi. The time then began!

Prof. Annette Street, the Head of RED Unit began by informing the regulations. A time for a small interview would also be allocated after the presentation of each of the participants. David, from the Faculty of Science, Technology and Engineering started the first time. His topic was “Reducing doxorubixin cardiotoxicity while maintaining anticancer efficacy.” Something that not everyone knows for sure! 🙂 But I guess this is the beauty of the event. As told, we are expected to tell other people our work in lay languages so they can understand and possibly get interested in our topic, which is good for future opportunities. I found David presented was flawless! People captured his research quite well.

After him, Karina stepped up to present her topic “Writing the body and l’ecriture feminine: writing back to French feminist theories of the body and corporeal feminism.” As she is from the Faculty of Humanities and Social Sciences, it’s clear that the research is strongly descriptive and qualitative. She grasped the audience’s sense in a very good way I could say (Unfortunately, I couldn’t find the twitter’s broadcast for her presentation).

Then, a new friend of mine, Ross, came forward to present his research about “Recovery expectations in low back pain.” He was so relaxed, he said, as he has just submitted his thesis and started with a new job in another University in the city. That’s why he smiled a lot!

I found all these three presentations were perfect! There were no hesitations, grammatical mistakes (which was apparent as they are English native speakers, I assume). They had clear points to tell. I started to get nervous. My turn then came. A technician helped me in putting on the small microphone for the TV recording. I looked at the judges and all audiences. I had to make myself familiar with the setting in seconds. The three minute countdown had started and I began my presentation. It was quite smooth, having no apparent  pauses and hopefully, a good stance and a determined research’s voice.

Here is the video that I obtained from the RED Unit website. I uploaded my presentation in my YouTube channel.

I finished my talk in around 2:47 minutes, which was good because it was not violating the 3 minutes time. I finished and Prof. Street asked me several questions in relation to the event.

Finally, Dinithi, from the Faculty of Economics, Business and Law, presented her topic about “Board of Directors – Who they are vs. what they do.”

After the interview, she sat back beside me. The event then ended.

After waiting for about half an hour, the panel came to its decision. Professor Andrew Brennan, the Postgraduate Vice Chancellor of the Postgraduate Research, announced the result. He began saying, “I believe you don’t want to be one of the judges today because this is difficult to decide as all finalists are on their top performances today.” The audience laughed. Too good to be true, I supposed. But, I believe in that, too. After a couple of minutes, he announced that the winners were David (1st winner), Dinithi (2nd winner) and Sanja (People’s Choice). The winner’s supposed to represent the University in the Trans – Tasman 3MT Final in Brisbane last October.

As you can see, I did not win this event. But, I am happy. There are several things I can learn from joining this challenging event. First, it challenged me in a total different way. It made me go beyond the limits. I had to condense everything in only a three-minute talk, which was a good exercise. It also helped me understand the study better. Second, it enabled me to know the potentials to project a good image. To learn from other topics and performances was a good thing. As a learner, I shall be grateful for this. Third, I was aware right from the beginning, there is a tendency that Education is a field that does not normally have direct, short, and clearly seen impacts, compared to, for example, science or health. This created another challenge as well. However, it could be my chance to show that Education is important. Mandela said once that “Education is the most powerful weapon to change the world.” Certainly, ‘weapon’ here should be perceived in a positive way. Fourth, as a Balinese, an Indonesian, a non-native speaker of English, this event gave better communication skill and greater confidence. I have been learning English since Junior High School, some years ago, and I understand that it was merely technical, non-communicative purposes. By having this activity, I could benefit practicing English in a different way. Finally, I felt blessed and encouraged, as previously told, that I have many friends and relatives who supported. One of my Indonesian friends even said, “I was also tensed and nervous during your presentation.” They knew how challenging the event was. To represent the Faculty of Education is an honor. To represent Indonesia is a great feeling.

Nevertheless, this was a very good experience I can share with, and tell others. This also creates many opportunities in the future for me to have similar experiences in any means. Good luck to the winners. Good luck to others who wants to participate next year. Here is the link of the University’s publication where you can read the news and watch all presentations.

I have finished the 3MT competition. However, it does not mean an end to a journey. Khalil Gibran said, “What makes a man good is not what he attains, but what he longs to attain.” Thank you for reading and have an inspiring day! 🙂

P.S. Read my story on the Faculty level here.

©mhsantosa (2012)
I am happy to share this. Please feel free to reblog or share the link, all with my accreditation. Thank you.